Logan County was created as County One by the Organic Act of 1890. The town of Guthrie was designated as the county seat and the capital of Oklahoma Territory. The county was named on August 5, 1890 for U. S. Senator, John A. Logan, of Illinois.[3][4]

The land in what became Logan County had been settled by the Creek and Seminole tribes during the 1820s and 1830s. However, these tribes had supported the Confederate States of America during the Civil War. Through the Reconstruction Treaties of 1866, they lost part of their lands in Oklahoma, which were designated as Unassigned Lands. These lands were opened to non-Indian settlement on April 22, 1889. The three easternmost townships were added to the county in 1891, after the Sac and Fox lands were opened to non-Indian settlement.[3]

Before 1889, the Kansas Southern Railway (later the Atchison, Topeka and Santa Fe Railway) had built a line from the Kansas-Oklahoma border to Purcell in Indian Territory. Stations built in the present Logan County were Beaver Creek (nowMulhall, Oklahoma) and Deer Creek (now Guthrie). After the land run, Guthrie developed into a center of trade. The Denver, Enid and Gulf Railroad (later the Atchison, Topeka and Santa Fe) ran from Guthrie to Enid, Oklahoma. The Choctaw, Oklahoma and Western Railroad (later the Chicago, Rock Island and Pacific Railway) ran between Guthrie and Chandler, Oklahoma, while the Missouri, Kansas and Texas Railroad ran east from Guthrie to Fallis, Oklahoma. From 1916 to 1944, the Oklahoma Railway Company interurban line ran between Guthrie and Oklahoma City.[3] 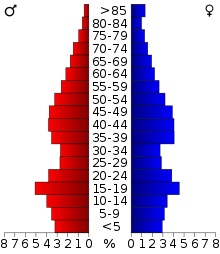 Age pyramid for Logan County, Oklahoma, based on census 2000 data.

There were 12,389 households out of which 33.70% had children under the age of 18 living with them, 59.2% were married couples living together, 9.8% had a female householder with no husband present, and 27.4% were non-families. 23.7% of all households were made up of individuals and 9.7% had someone living alone who was 65 years of age or older. The average household size was 2.57 and the average family size was 3.04.

In Presidential politics, Logan County has been a reliable Republican county. Since 1960, it has only voted twice for the Democratic candidate, in 1964 for Lyndon B. Johnson) (53-47%) and last in 1976 when it narrowly went for Jimmy Carter (50-48%). Barack Obama barely received over 1/4th of the vote in 2012. This was a poorer showing than George McGovern‘s 29% performance in 1972.

In U.S. Senatorial politics, since 1990, it has also voted Republican in every contest with the exception of David Boren‘s reelection in 1990, when he carried every county in Oklahoma.

Sites listed on the National Register of Historic Places: