Over the years, Kingfisher County has seen oil and gas production come and go. New horizontal drilling techniques and multi-stage plug and perf completions, are changing the landscape of the oil and gas fields as we know them in the United States. Kingfisher County, Oklahoma is a great example. Old formations previously thought to be to “tight” of a reservoir to ever produce economic quantities of oil and gas, are now coming alive with the advancements in new drilling and completion technologies.

1280 Royalties, LLC has a process that works. We go through ever detail to ensure we understand your mineral rights . From our Geologist reviewing the rocks in King Fisher County, to our Engineer running the decline cure analysis on the wells producing near your property, We can assist in the purchase of your mineral rights in Kingfisher County, OK.

Contact 1280 Royalties today to discuss the sale of your mineral rights in Kingfisher County, Oklahoma.

Limited archaeological surveys may have discovered evidence of pre-contact peoples, including Paleo-Indian and Archaic (6000 BC – 1 AD) groups that used the area for hunting and foraging. The historic Osage, Cheyenne, and Comanche tribes traversed the prairie grasslands of this area.

Before the county’s creation, The Chisholm Trail’s many routes crossed the area. A stage road which paralleled the trail had important stops at Dover Station, King Fisher Station and Baker Station.

The area was given to the Creek Nation by the federal government after their forced removal from Georgia. At the end of the American Civil War, the Creeks were forced to cede the land back to the federal government for siding with the Confederacy. It became part of the Unassigned Lands, and the area was opened to non-Indian settlement in the land run on April 22, 1889.[4] Several towns, including Kingfisher, Oklahoma developed soon after the land run.[4]

Originally this area was called County 5, when the Organic Act of May 2, 1890 created Oklahoma Territory. At an August 5, 1890 election, the voters of County 5 overwhelmingly voted for the name “Kingfisher” over “Hennessey” and “Harrison”. The origin of the name is unclear. The Encyclopedia of Oklahoma History and Culture mentions three different possibilities. The first is that the name memorialized a local rancher, David King Fisher. The second version is that King and Fisher were two different settlers, whose names were combined for the county and town. The third explanation was that the name was for a rancher named John Fisher and for whom Uncle Jack Creek was named. [5] 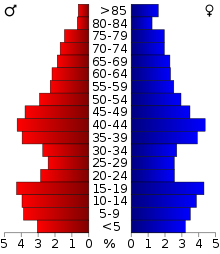 Age pyramid for Kingfisher County, Oklahoma, based on census 2000 data.

The following sites in Kingfisher County are listed on the National Register of Historic Places: